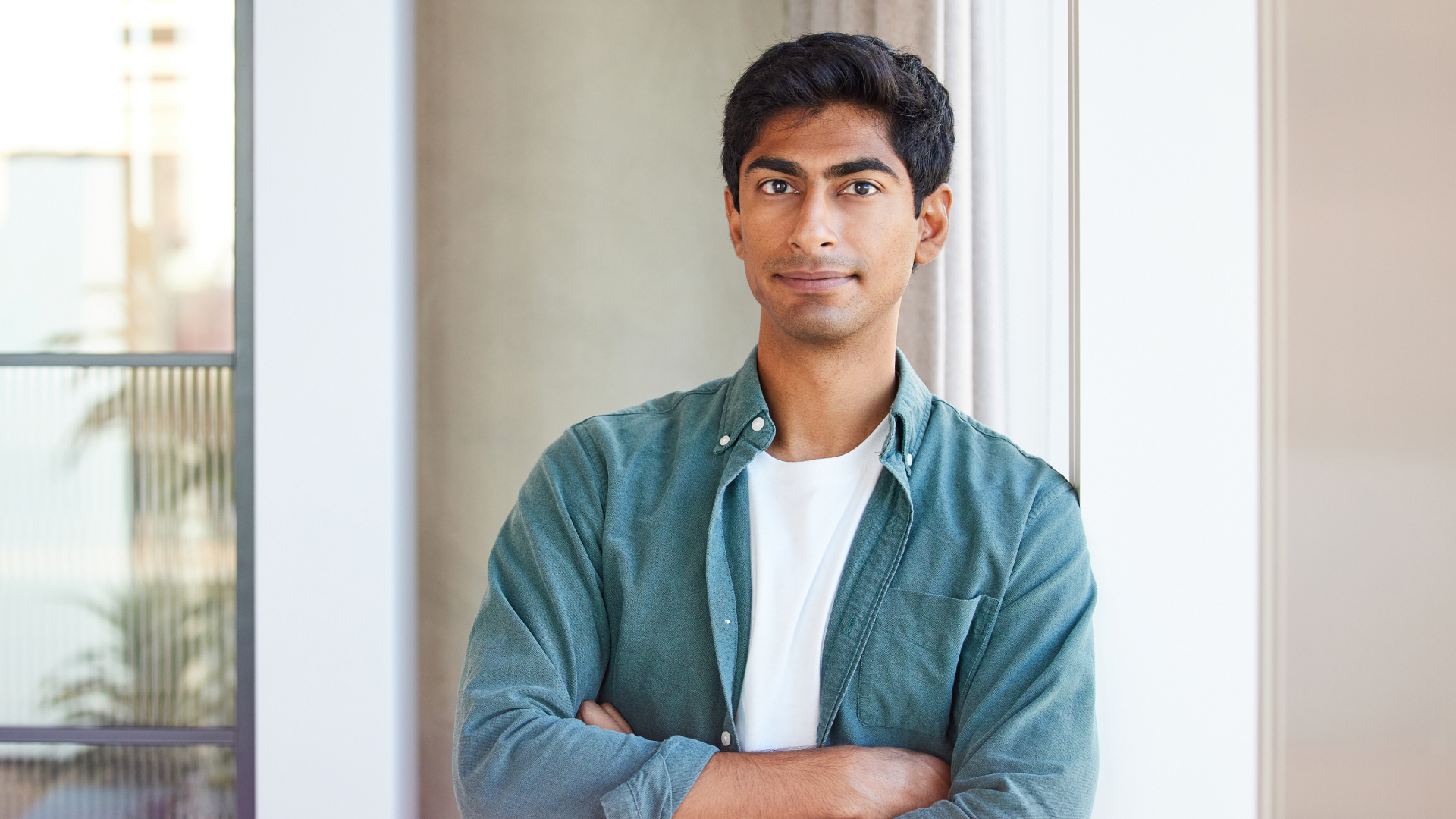 Today’s post is all about Akhil Raju, a software engineer on the robotics team. We originally met Akhil in season two of DeepMind: The Podcast, but we wanted to get to know him better and hear more about his path to DeepMind.

What sparked your curiosity in artificial intelligence (AI)?

When I was young, I thought about AI in the same way I thought about magic. Yes, I wanted to hang out with R2-D2 and Optimus Prime – but I also wanted to go to Hogwarts. That was until I turned 12 and started participating in LEGO robotics competitions. At that moment, I learned that robots weren’t a fantasy or something that could only exist in the far future, but rather something that could be created in the present. Also, it turns out that playing with robots is incredibly fun.

A lot! From there I continued with robotics competitions, started university at MIT, and spent a lot of time studying computer science with a focus on robotics. After graduation, I completely pivoted away from the field and joined a startup in San Francisco for a few years before moving to Google.

It was great but I'd always wanted to live abroad so I started looking at opportunities outside the US. At that point, I decided to move to London and set my sights on DeepMind. I actually didn’t think DeepMind hired people without PhDs, but I gave it a shot and it worked out!

Because I was doing a transfer from Google to DeepMind, I was able to apply to multiple teams at the same time. The robotics team wasn’t on my radar until my recruiter asked me, “By the way, you have bits of robotics on your resume. Have you thought about joining our robotics team?” I bit at the opportunity. And honestly, it’s been amazing ever since.

Can you walk us through a typical day? What’s your schedule like?

Every morning I head into the office for breakfast, where without fail, my teammates already are. It’s become a part of our daily routine to have breakfast together before jumping into our work.

I spend most mornings in the robotics lab, fixing failures from previous experiments or setting up new robots. Even when there’s not much to be done, I get energy from just walking around and seeing our robots at work, hearing the hum of the machines and motors. We’ve grown a lot over the past few years, and you can feel it while walking around our space.

My afternoons are a mix of meetings, coding and – now that most people are back in the office – an impromptu chat or two. That’s one of my favourite parts of being in the office – the random catch-ups and whiteboard sessions that help me learn and move quickly. From there I’ll take a quick snack break, and if the weather is nice, head to the balcony to catch up on some of my favourite US sports podcasts (I still haven’t made the switch from football to football). Then I’ll code a little while longer.

The culture at DeepMind is one of the best parts of being here. From my perspective, we’ve found a nice balance between a university, start-up, and large company. Most of the work culture comes from the first two.

It’s not unusual to find people brainstorming in front of whiteboards with maths scrawled across it, or someone tucked away in a quiet corner reading the latest research papers. Similar to a start-up, there’s a palpable energy throughout – you can truly feel everyone's excitement.

It may be cliché, but when you love what you do it doesn't feel like work. The robotics team is a miniature version of all of this, with the bonus that many of us are close friends outside of work, too. It’s perfect.

How was working from home during the pandemic?

Like most people, I spent the first month of the pandemic in disbelief, assuming we’d be back to normal soon. The majority of our meetings and collaborations moved online which was an interesting experience for our team in particular.

Once the realisation set in that we were in this for the long haul, I decided to spend my new-found free time to better myself. I tried a bunch of hobbies – long enough in each case to say I’d tried it, but not long enough for anything to stick. I had my guitar phase, a cooking phase, and even a puzzle phase, but my favourite was the tie-dye phase. There were a few weeks where I tie-dyed everything, from shirts to shorts to socks, and now they sit at the bottom of my closet (where they honestly belong).

What kind of positive impact are you hoping AI can have on the world?

I feel lucky to be at DeepMind and to be able to focus on the work that I do. Robotics – and AI in general – will be a positive force in the world, and it’s exciting to be able to help move that forward.

On the whole, I’m particularly interested in seeing how AI can help mitigate climate change – whether that’s by finding ways to use energy more efficiently, or enabling us to produce clean energy. Researchers at DeepMind are already thinking about this, so I’m hopeful that we’ll be able to move the world forward and make an impact in this space.

Any tips for aspiring DeepMinders? Or someone looking to get into a similar role?

If you want to be at DeepMind, go for it. Apply, interview, and just try. You might not get it the first time but that doesn’t mean you can’t try again. I didn’t think I would get a job at DeepMind, and when I got the offer, my initial thought was - surely this is a mistake! Everyone doubts themselves – I’ve never felt like the smartest person in the room. I’ve often felt the opposite. But I’ve learned that, despite those feelings, I do belong and I do deserve to work at a place like this. And that journey, for me, started with just trying.

Life at DeepMind
When a passion for bass and brass help build better tools
April 28, 2022

Company
Opening up a physics simulator for robotics
October 18, 2021

Life at DeepMind
Kyrgyzstan to King’s Cross: the star baker cooking up code
May 26, 2022

Life at DeepMind
Advocating for the LGBTQ+ community in AI research
June 1, 2022

Life at DeepMind
Leading a movement to strengthen machine learning in Africa
June 23, 2022